A Mason is a man and a brother whose trust is in God; he will meet you on the Level and act upon the Square. Truth is his Compass and he is ever Plumb in his dealings. He is master of himself. In the Lodge of life he wears unstained the white lambskin of innocence. From his initiation as an Entered Apprentice he travels ever toward the East in search of light and Wisdom until he receives the Final, the divine Password that admits him into the ineffable presence of the Eternal Supreme Grand Master of the Universe.

​Freemasonry is the oldest and largest, and most widely known fraternity in the world. But throughout history, its structure and teachings have remained a mystery to many, and myths and misconceptions about the fraternity have arisen.

Exactly when Freemasonry began is not known for certain, but many historians trace the beginnings of Masonry to the middle ages, when stonemasons and other craftsman traveled throughout Europe. These men were known as free mason, because, unlike bondsman, these free masons would gather in shelter houses, or lodges, and eventually organized themselves into Masonic guilds, using the secrets of their craft to identify themselves as masons. The square and compass - the tools of the mason's trade became the symbol of their brotherhood, and of moral truths which they convey.

When the need for such buildings declined, "Speculative" or "Symbolic" Masonry evolved, using the customs and tools of the craft to convey moral truths. The growing organization attracted men of integrity and good will, and the Masonic guilds began to accept members who were not masons, calling them "accepted masons." The fraternity finally became known in some jurisdictions as "Ancient Free and Accepted Masons" and in other jurisdictions as "Free Accepted Masons" There are over 13,000 lodges in the United States. In Illinois the fraternity is known as "Ancient Free and Accepted Masons."
​ 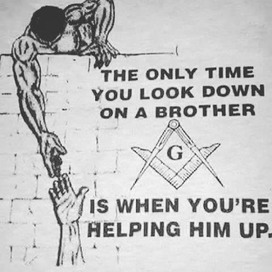 Lodges organized to form a Grand Lodge, which governs Lodges in specified territory. In most of North America, each state or province is governed by its own Grand Lodge. While the Various Grand Lodges are bound together by tradition and customs, each is sovereign and autonomous in its own jurisdiction. There is no central governing body for any group of grand lodges or for Masonry as a whole. Today the majority of all Grand Lodges gather for an annual Masonic Conference where they discuss issues of interest to the individual jurisdictions.

The Fraternity utilizes certain rituals, symbols and signs of recognition that are not made public, but Masonry is not a secret society. Its only secrets are its methods of recognition and symbolic instructions. It does not hide its existence, and many Masons proudly wear Masonic rings, tie clips, or Lapel pins. Its buildings are known to all, and its meeting times are well published.